In september 2016, Conix RDBM and Whitewood invited Rotor to be involved in the Multi project.

The context in which the Philips tower has been built during the sixties, is widely known for its radical changes to Brussels urban fabric, and has been the object of discussion ever since. Up until today some people are suggesting to radically change the tower's appearance, or even to simply destroy it. However, this would mean making the same mistake as made by the ones building the Philips tower: not acknowledging the quality of what already exists. Contrary to other conversions of modernist towers in Brussels (the Astro Tower, the Zuidertoren / Tour du Midi, the Finance Tower, …) where the original materiality completely disappeared, the reconversion project for the Philips tower wants to encourage a reconciliation between the building and the city.

During the sixties, production chains for steel construction elements, elevators, or curtain walls were local economic activities that the architects of the tower, Groupe Structure, wanted to support. What is their equivalent in our age? During recent years, Brussels has taken a leading role in enabling the circular economy to grow and develop itself. The Multi project wants to be an extra stimulus for these activities. Hence, an ambition level has been determined when it comes to the integration of reclaimed elements: the goal is that a minimum of 2 % of components installed in the project will be reclaimed ones (percentage in value and in weight). These components can originate from the building itself or from other buildings. Where such an objective would be simple to achieve in the case of a small project, here it is an ambitious challenge.

Rotor is assisting Conix RDBM and Whitewood during the design and the construction phase to enable the integration of reclaimed elements. In order to make the 2% goal reachable, Rotor is looking for candidate materials. Given the size of the project, the materials need to be available in large enough quantities on the reuse market. Equally important is the aim to choose materials that will find their right place in the project, and that have the potential to contribute to its architectural quality. Particular attention is paid to materials coming from other exemplary, tertiary buildings in Brussels that are currently being redeveloped, for which the Multi tower wants to be a new destination. During 2019, a selection of candidate materials was exhibited on the 13th floor of the building.

The redevelopment of the tower will be finished in 2021. 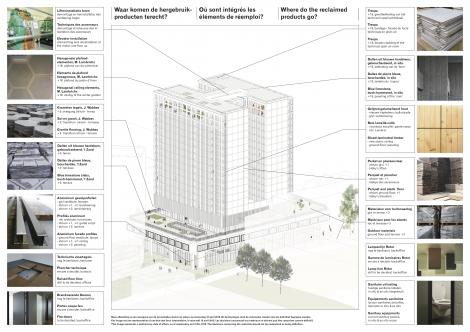 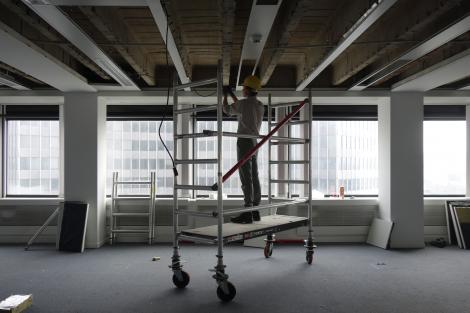 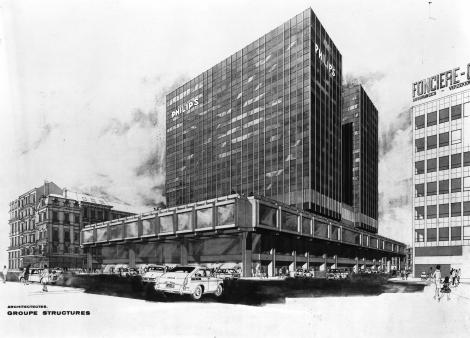 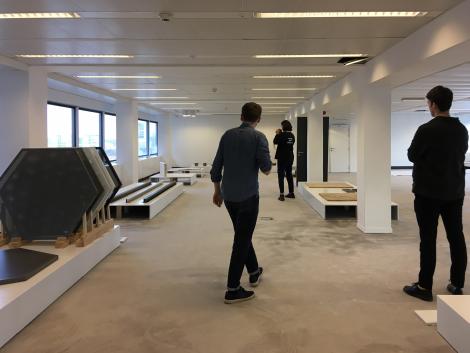